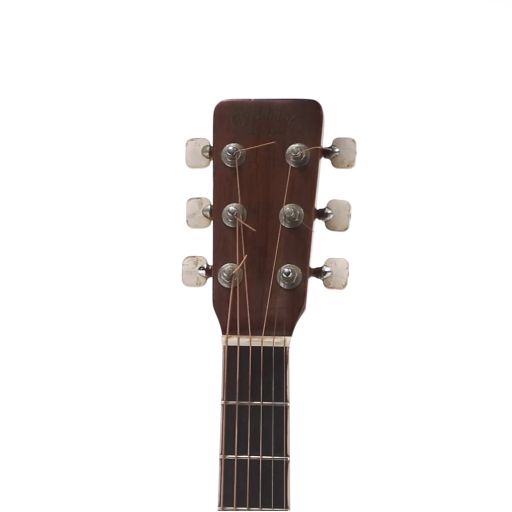 The Birth of 'The Boss' Bruce Springsteen

The Birth of 'The Boss' Bruce Springsteen - 1965 Martin D-35 Natural Acoustic Guitar, Serial #204591.
Per our consignor Bob Spitz (an early Springsteen co-manager, journalist, and author), this is a guitar of his that the Boss borrowed to write and record songs on his first two albums and perform onstage.

" In 1964, my parents bought me one of the first demonstrator Martin-D35 acoustic guitars for my fourteenth birthday. In 1971, Bruce Springsteen used to to write most of the songs for his first album in my Greenwich Village apartment, then used it to record almost all of the songs from his first two albums - Greetings from Asbury Park and The Wild, The Innocent & the E Street Shuffle. I was one of Bruce's managers at the time, and he used my guitar often in his performances.

"In the fall of 1971, Bruce auditioned for John Hammond at Columbia Records using a crappy little guitar a friend had lent him. Hammond was sold and told Bruce he'd like to see him perform in front of an audience, preferably later that night. In his biography, Bruce said that Mike Appel made calls to clubs, but I know from events of that day and from what John Hammond told me that Hammond personally called Folk City and arranged for Bruce to participate in an 'open mic' that same evening. That afternoon, Bruce killed time in my studio apartment on West 12th Street and then he and I walked over to Folk City. Before we left, he asked me if he could use my guitar, so we took it with us. John Hammond came in a few minutes before eight, used his celebrity to make sure Bruce went on first, and he played that show with my guitar."

This was 1973, an era that was pre- Born to Run, with future classic Boss staples like "Blinded By the Light," "Growin' Up," "It's Hard to Be a Saint in the City," "4th of July Ashbury Park (Sandy)," and "Rosalita (Come Out Tonight)" in rotation. With his first two albums released in the same year, the Boss was well respected, and poised for bigger heights. Yet his low record sales at the time relegated him to be a critic's favorite. Totally fine for those who don't wish to be too big, but Bruce had the kind of star power his contemporaries did not.

He would soon be a man of the people. An icon. And as writer (and Bruce's future manager) Jon Landau would famously proclaim in May of 1974 in a concert review for Boston's The Real Paper, "I saw rock and roll future, and its name is Bruce Springsteen."

From Greetings from Ashbury Park to Born to Run to Nebraska to Born in the U.S.A. to The Rising, Bruce has this kind of rare gift in his songwriting. From describing youthful rebellion to what love is to gripping with adulthood, he makes tunes that hit hard in your youth and stays with you well into adulthood. And the tunes are passed down to further generations.

A prolific journalist for decades, Bob Spitz has authored acclaimed and bestselling books such as The Beatles: The Biography, Reagan: An American Journey, Dearie: The Remarkable Life of Julia Child, Dylan: A Biography, and Barefoot in Babylon: The Creation of the Woodstock Music Festival. He was there from the beginning of Bruce's career, a man with a dream that came true and changed pop music forever.

Original finish with minor nicks and dings. Five open cracks on the 3-piece Brazilian rosewood back. There is a top crack from the bridge to the butt that is still open but has one cleat. The bridge is lifting. Good neck angle as a result of a reset. Original tortoise colored pickguard has been replaced with a black plastic guard. Tuners are original with replaced buttons. Capo dings on the back of the neck show slight finish touch-up. Condition: Good.


NOTE: CITES compliance applies to this lot. International bidders may not have the lot shipped to them. Transport of such lots require special licenses for export, import or both. Bidders are responsible for any licenses and /or permits. California State law prohibits the importation of any product containing Python skin into the State of California, thus no lot containing Python skin will be shipped to or invoiced to a person or company in California. Fossil Ivory is currently banned or restricted in the following U.S. States: New York, New Jersey, California, Hawaii, New Mexico, Oregon, Illinois and New Hampshire.